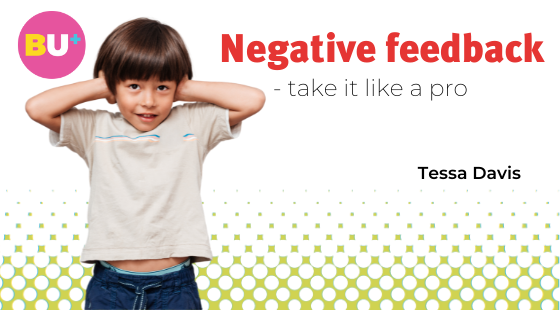 Receiving negative feedback really, really hurts. In one particularly painful experience I thought I was sitting down for a meeting with my boss to get a pat on the back and be told ‘well done on a great job Tessa!’ – but actually the meeting was to tell me that I’d done the wrong thing.

It totally threw me off guard. I was surprised, upset, confused as to how this had gone in entirely the opposite direction from the one I was expecting.

I don’t think anyone loves getting negative feedback, but for some people at least outwardly they seem to totally brush it off and not care. Whereas I spend weeks going over and over it in my mind. I know, I’m a grown adult and it’s just a fact of life and work.

But how do I know which critics to listen to and which to ignore? How should I learn to take negative feedback without turning into a blubbering mess on the floor or throwing things across the room in a rage and storming out (I haven’t technically done that but I HAVE wanted to)?

Here are seven strategies that I find really helpful that allow me to take negative feedback like a pro.

Good feedback is compassionate, specific, and a match. It’s compassionate, meaning that it’s delivered with kindness and sensitivity to the recipient’s needs. It’s specific, so giving examples to illustrate why the feedback’s being given and maybe specifics about who the feedback is from. And it needs to be a match. That means it needs to match the context and the emotions of the recipient. Ideally it isn’t completely out of the blue at a time that is not appropriate or doesn’t suit the recipient.

When I think back to the times where I’ve received negative feedback or criticism, the ones that have been the most challenging or the most painful are the ones that haven’t been delivered with compassion, with specificity, or weren’t a match to ensure that they were delivered at an appropriate time or in an appropriate way. That example I shared right at the beginning was none of these things, and the element of surprise made it worse for me. But we cannot choose how our feedback is delivered or who delivers it to us, and our role as the recipients of negative feedback is to work out how we can use that feedback and get the most out of it and use it to improve ourselves and optimise our performance.

Read these posts next